Each time I go to a Tweetup, I have the best intentions to write about it and then life in that way creeps up on you and gets in the way.

So here I am writing about it now while I can. (Yep at 6 to midnight. I’m writing a blog post). 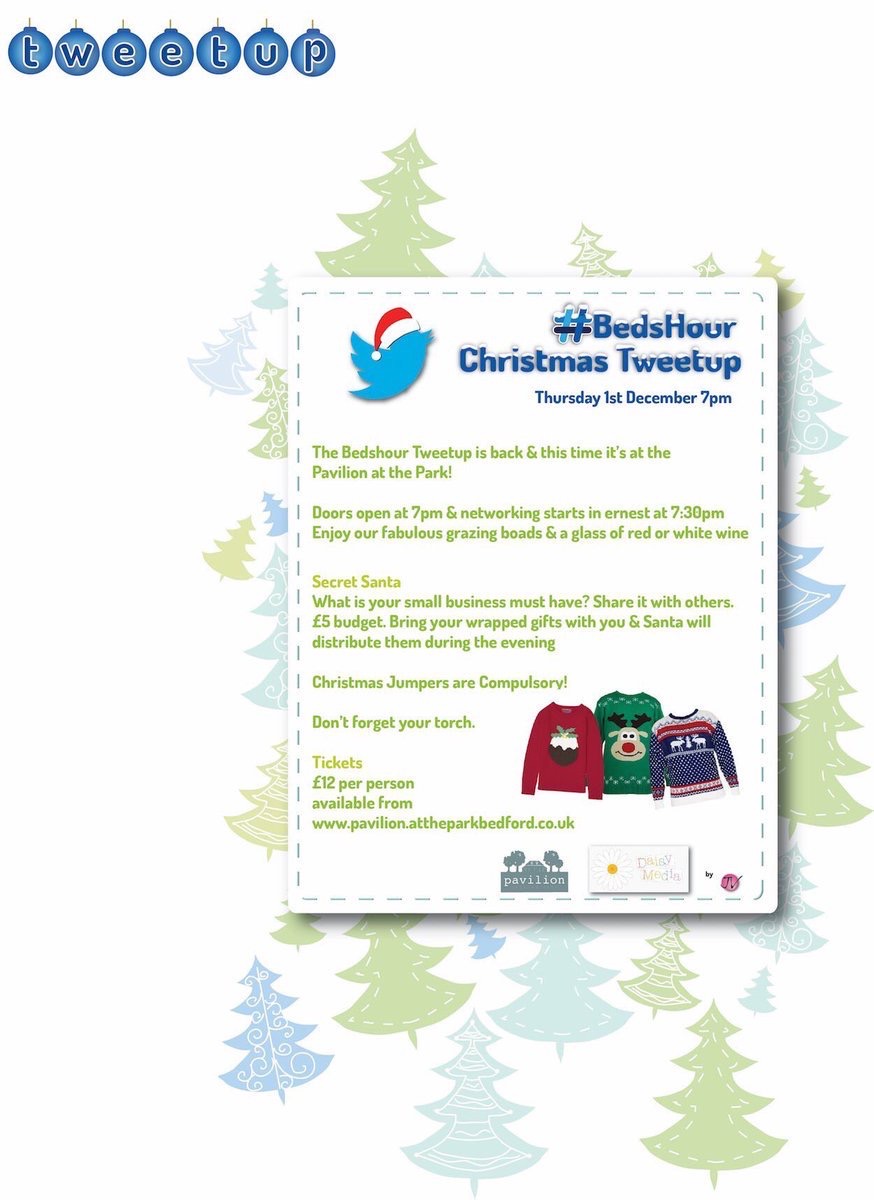 Our Tweetup this time was hosted by Emma and the lovely team at the Pavilion at the Park (if you’re not following them on Twitter they are @bedfordpavilion). The menu was grazing boards with the intention that we could all sit down and keep networking and chatting while eating.

Anwyn (Evie and Lola) suggested that rather than us each stand up and talk about our own businesses (which in all honesty can be terrifying around new people!) we would tell the person to our left who would then stand up and talk about us and our business. I was sat with Emma to my right so I stood up and spoke about her, the Pavilion, the Kiosk in the Park and her a few other things that I could remember and we had discussed while tucking into our meal. 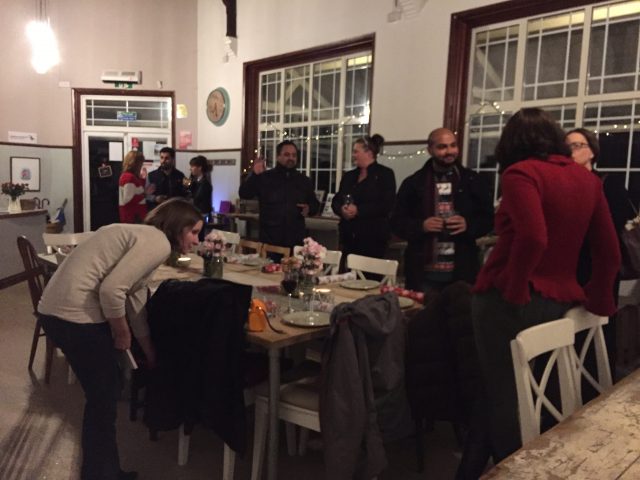 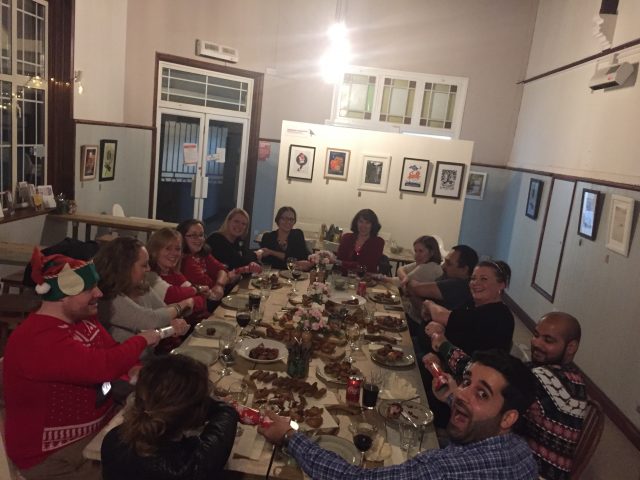 The grazing boards were lovely with lots of different bits to choose from and our two gluten free people were also well catered for (I believe! They might tell me differently!). My favourite was the pigs in blankets (made with proper size sausages rather than chipolata sausages) or the halloumi sticks. My favourite from the desserts would be the mincemeat crumble although I did smuggle home a piece of gluten free chocolate brownie for my husband (especially as he then played taxi for me to get home).

As it was Christmas we had a Secret Santa, the theme for the swap was “What is your small business must have?” I received a lovely big mug and two sachets of tea from Q at Nothing but Tea. I would tell you what I gave but that might give away the game unless my person has guessed who gave it to them. (If you want to know send me a tweet @daisy_media). 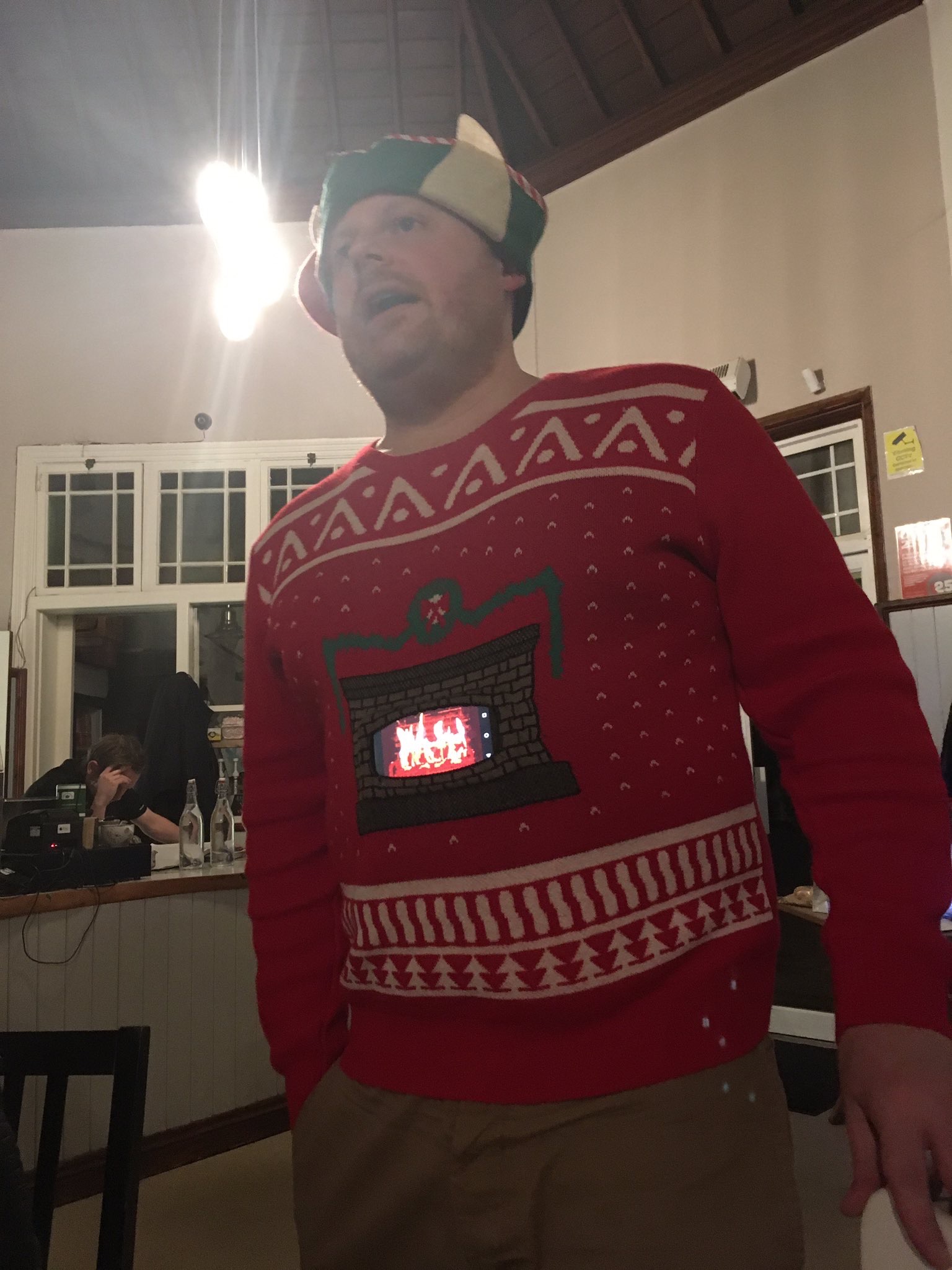 However, I think the winner of the best Christmas jumper had to be Paul from White Label Dev. It had a little pouch for his phone so that he could play a log fire video on his phone and this appeared in the fireplace on the jumper.

Overall it was great food with great company. Once Christmas is over, I wIll have to start on the next Tweetup maybe?

Hi there! I’m Hannah and I run Daisy Media. Whether you need help getting started or someone to manage your social media presence, just drop me an email and we can get chatting about your requirements. When I’m not running my business, I blog, crochet, knit, creative journal and any with lots of stickers! 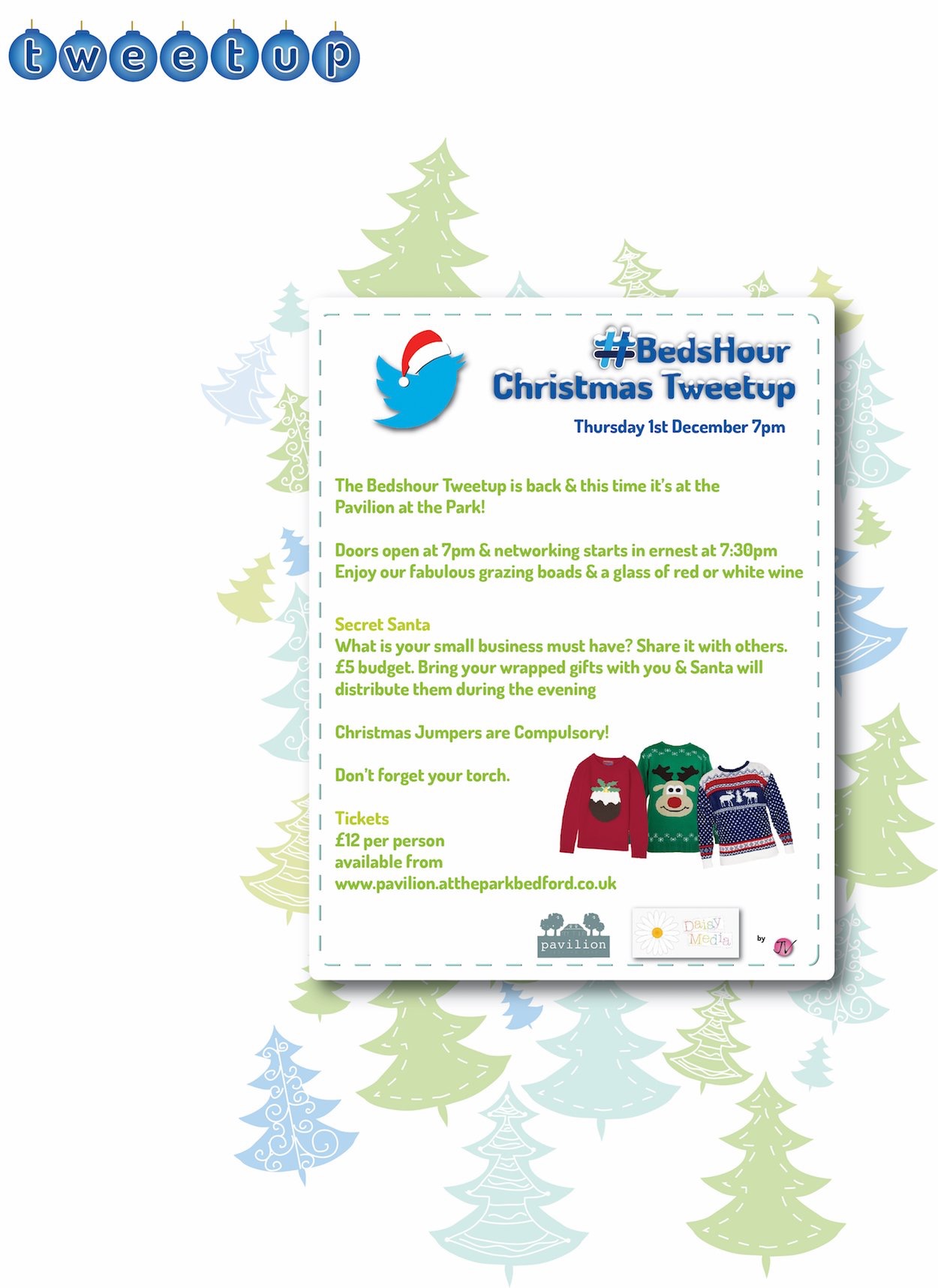 Pull that Christmas jumper out of the wardrobe and wear it on Thursday 1st December. We’ll be getting together at the Pavilion at the Park to see in the festive season.

Bring your Secret Santa present. The theme is: What is your small business must have? Share it with others. The budget is £5. Bring your gift with you and Santa will distribute them during the evening.

Doors open at 7pm and Networking commences at 7.30pm. Don’t forget your torch!

Further information and booking can be found here.

We’d love to hear about what you enjoyed or didn’t enjoy at the last tweetup. If you can spare a few minutes please fill in the following questionnaire – Thank you!

Any issues or further comments let me know @daisy_media or just email here.

Hi I’m Hannah aka Daisy Media and I’ve been self-employed for the last two and a bit years but it didn’t really start there. I graduated university in 2007 with a degree in Performing Arts and Plan A was to go back to university to do a PGCE to become a Primary School teacher. Around this point Plan B kicked in for various reasons and I spent the next six years working for different companies, this was usually in customer service or administration as that was where I had my experience.

By May 2012 I had left the post I had spent about five years in and had started looking for something else. I started working as a temp doing data entry tasks. I didn’t expect to stay more than six months and figured that it would work while I looked for something else. As it happened during my training, the guy who would be my team manager got people to raise their hands depending on their level of skill when it came to Excel. Thanks to bits that my Dad has taught me or I have learnt over the years, I still had my hand up even when my manager was asking about VLOOKUPs and HLOOKUPs. I ended up staying for just over a year and ended up working on spreadsheets rather than the data entry tasks that I had been originally employed for.

In October 2013, I found out that I was pregnant and with that came thoughts about what I was going to once baby had arrived and I had finished my Maternity Leave. I clearly didn’t really want to have to start thinking about it before I needed to but if I was going to need to go back to a full time job then I needed to start saving up for childcare.

I went onto maternity leave at the beginning of May 2014, I had been running my own personal blog for a number of years so worked on that as well as crocheting various projects while I started mulling over the idea – what if I did the thing that scared me every time I thought about it and became my own boss. I could work during nap times at least to start with then in evenings if needed.

So the rest is history as they say, the end of my maternity leave came and went and I got all registered officially as self-employed. Something about it was kind of scary. Each time it had crossed my mind to go self-employed when I was in full time employment, it was very scary and felt like it would be a jumping out of a plane without a parachute kind of situation.

Thankfully I had my husband and parents on my side to be my cheerleaders when I questioned my sanity!

Along the line Daisy Media was formed, at first it was mainly by word of mouth. I had intended to work with local companies and just see how it went. I was then approached by a friend of mine who lives in the West Midlands about taking over from her with one of her clients. Her client was based in London.

So what does Daisy Media do?

Well all sorts. I started with the intention it would be social media management and admin tasks as needed. I have been in business around a year and I’ve done some basic web design and content managment along the way too and I have completed my first “from scratch” website in the last couple of weeks although it’s still being tweaked as we get it right. I’ve collaborated with another local small business to create a website for a local church and hope to get collaborating with more BedsHour people over the next year.

Somewhere along the line I found BedsHour and it was just what I needed, with having a small child in tow during week days networking can be a real challenge so BedsHour gave me opportunity to network while breastfeeding sat on my sofa in the early days and now that I have an almost two year old I can network from my computer while my toddler sleeps upstairs. I don’t need to find a babysitter!

The social side of me loves organising the tweetups – even if it’s just an informal one drinking coffee in the Pavilion in the Park or invading a coffee shop in town.

But what about me personally?

I turned 30 at the end of April 2016, I’m a wife as well as foster carer and Mum. I love blogging, crocheting and watching more TV than is good for me! I am a bit of a Netflix addict and probably need some kind of therapy! Since April I’ve been regularly attending ParkRun although running is still a bit of a crazy activity for me to even consider doing! I’m just about sub-50 if I get a shimmy on but my record is around 43 minutes and I’m not quite sure how I ever achieved that!

Favourite Colour: Green – racing or aqua green not lime green!
Favourite Song: Layla by Eric Claption or Raggedy Doll by Philippa Hanna
Favourite Film: The American President (it’s all about that French bit at the ambassador’s reception and that speech at the end!)